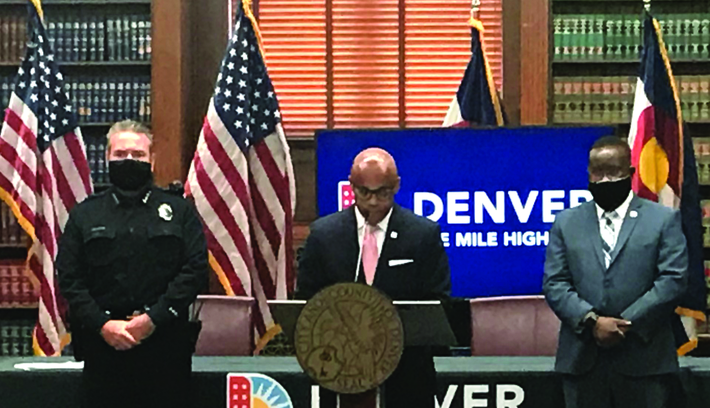 America is currently experiencing a dilemma not seen since the Civil Rights Movement. The death of George Floyd by police officers Derek Chauvin, Thomas Lane, J. Alexander Kueng and Tou Thao has sparked mass protest across the world against police brutality and racism.  Protesting, looting and rioting at this level has not been seen since the beating of Rodney King on March 3, 1991 in Los Angeles, California resulting in 63 deaths, 2,383 injuries, more than 7,000 fires, damage to 3,100 businesses and nearly $1 billion in financial losses. Protests from Floyd’s death have resulted in more than 11,000 people being arrested and abolition of police forces is being considered. Police brutality has been a concern in America for awhile now and seems to be getting worse.

Denver’s newly appointed Executive Director of the Department of Public Safety Murphy Robinson plans to change this to ensure it isn’t repeated in Colorado. The safety of the City of Denver has been placed in his hands.

Robinson’s journey has not been a long one, moving and maneuvering his way through the system from an impressive resume and experience at a very young age.  In fact, Robinson was a police officer before reaching the legal age to carry a gun. He started at Xavier University in 2010 and just 10 years later he landed his current position where he hopes to create change for a better future.

In spite of his busy schedule Denver Urban Spectrum caught up with Murphy to see what those changes might be.

Denver Urban Spectrum: What are your three top priorities as the new Executive Director of Safety?

Murphy Robinson:  First and foremost is to implement criminal justice system transformation and to make sure we can implement policies and new practices within the Department of Public Safety that would adhere to what this community want when it comes to changing our criminal justice system. It is vital that I be one of the leaders and it is also vital that the community lead those efforts; a community led process is much more impactful than a Department of Public Safety administration led process. The second is we get us fiscally sound. We are in a downturn right now in the city because of COVID-19 and have lost record numbers of revenue to the city. It is my responsibility to make sure that the services we provide to the city can still be provided. I will have to make some really hard decisions on how we utilize that revenue, but also make sure we think outside the box of how we deliver services and what services we deliver. And thirdly would be community engagement. It is vital that the community not only see me just as the Public Safety Director, but they see me as an ally, as a Black man, as a Denverite and know that I take this job and my role very seriously. I want this community to be one that I am proud of for my daughter to live and grow up in. I want this community to thrive for everyone, to include small businesses and Black and brown people who live in our city no matter what neighborhood. Community engagement is key for me. I plan on that throughout my career and hope to be that stakeholder our community can call on for systematic change.

DUS: What steps do you believe are needed to address the issues of police and its relationship with communities of color, and in particular, Denver?

MR: The first thing is to shut our mouths and open our ears.  It is time to listen.  We need to listen to our community to understand what is best for our community.  I think we have actually implemented many, if not all, of our policies in the recent past, but I think what I would like to do is support our community in moving some of those things forward. Secondly, it is important that I establish an office that deals with the implementation of such policies. It is easy for me to say yeah, we are going to do this, but it’s another thing to actually do it. We have to have a set of people within my office who focuses on that implementation and who can continue after my career in Denver. The last thing that we need to do is make sure we don’t throw the baby out with the bath water. It is vital to know there is a reason we have a police department and the police do not just respond to things that are easy to deal with. We must make sure that we aren’t going to put our community in a place where we look back and say it was a mistake. It’s important we redefine the police, but I don’t think we should get rid of them.

DUS: In your opinion, what would the defunding of police (in Denver) mean to communities of color?

MR: To me, defunding the police doesn’t mean getting rid of the police. It means how do we utilize some of the dollars that are used in the police department for alternative response methods. I think that must have a thoughtful process around it.

DUS: Do you support the cancellation of police contracts to provide school resource officers to school districts?

MR: Yes.  I do. It became a law and it is a school board decision to do that. We will make sure that the schools still have the appropriate responses they need, but because the school made the decision, I will support it.

DUS: Is the issue of race a systematic problem in your estimation?

MR: Yes.  Race in our country has always been a problem because it is in the founding fabric of our country. When I am constantly reminded in my everyday life about, the color of my skin by everyday people that means we have a problem. The fact that my skin and the color of it have repercussions, whether positive or negative in my conversation, means we have a problem in our country. We have a huge issue, but I also think that we have been presented with an opportunity to help move the needle in on what race issues look like to America. We will never be able to delete the past or our history, but what we can do is define a new history for the next generation on what race means to them. That is my goal.

DUS: As a Black man, have you ever personally experienced a negative encounter with police? And if so, what happened?

MR: Yes, I have. In fact, I’ve had a number of negative encounters. Matter of fact, when I was a police officer in Cincinnati, I was pulled over about 17 times in my five years in Ohio. I would say four of them were in one night, within one hour, when I was picking up my twin sister from the airport. And the reason they pulled me over was a few of my college friends and I were going to pick up my sister and we were all Black. There was no other reason.  When they came to my car they just said ‘what are you doing, where are you headed?’ That is not a probable cause to pull someone over. That is one of the light experiences.

DUS: What recommendations would you make to the training programs?

MR: First, I think we should really make sure that we are staying up on and implementing our bias training. We call it implicit bias, but we also need to talk about explicit bias. It is important we start having intimate conversations with the police department about race when training in our recruit classes. It’s important to have those conversations about why we are where we are at, and what brought us here? Why are black people so angry right now? If we can have a serious conversation about that, then we can move the needle because I think a lot of what new police officers don’t realize is that they are stepping into an arena that has nothing to do with them as an individual. It has everything to do with the system that’s been cast upon us as Americans. They need to understand what their role is and when they put on that uniform what it means to people. It doesn’t always mean they are going to be regarded with open arms saying ‘thank you, come save me.’ It could mean that the cop is here and they are going to try and hurt me. How do we change that? We change it by educating our police officers about what that means. That will then dictate how they approach those situations while keeping themselves safe. I also think it's important to have venues where they can actually speak to people experiencing incarceration and really have them understand that whenever you write a ticket or put handcuffs on someone you are changing their life forever. It is vital that our officers really understand that that is a life changing action.

DUS: Colorado just passed Senate Bill 217. Do you think it will help?

MR: I certainly hope so, especially because it is law now. I think we have to try different mechanisms to move the needle and I think that as we implement it, we will understand if it will help or not. The good thing about laws is that they can always be changed. So, if it is not helping, we can move to have it changed. I really hope it’s a successful bill to help move the needle to how we do policing in the 21st century.

DUS: Is there anything else you would like to add?

MR: First, I appreciate you for taking the time to do this. I will say this, we are living in a time that a few of us have been chosen to lead and I am honored, privileged and humbled to lead us during this time in being able to move the needle and change history for what the 21st century policing can look like. I also encourage the community to become a part of the solution. Help me, help us move this needle. I ask the Black community to really step in at this moment. Don’t just protest. Don’t just demonstrate but come in and help the community thrive. That means whatever skill you have, use those skills to educate and help our young people. Help our young people to thrive in our society because that is truly the measure for what our society will look like in the future.