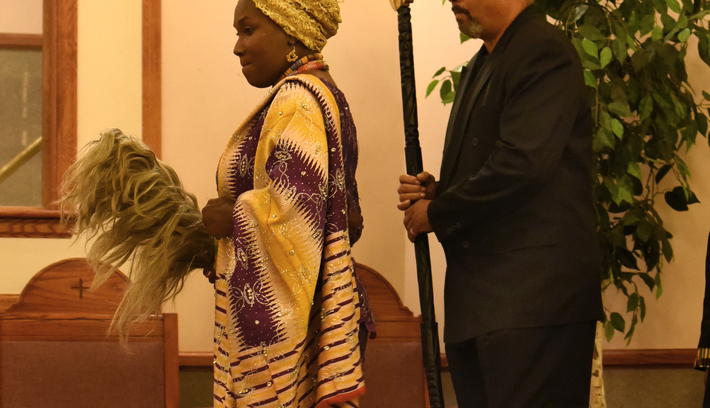 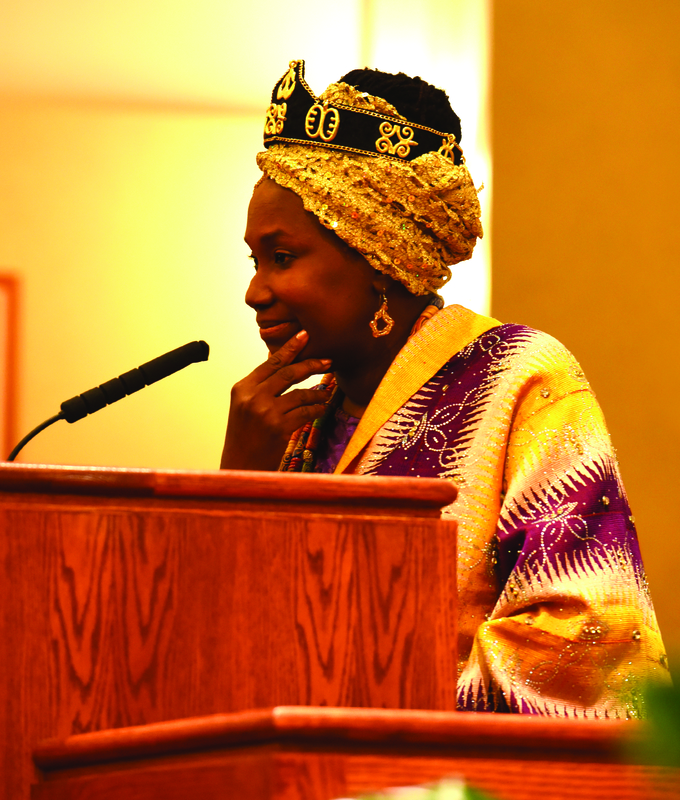 It’s not often that you are fortunate enough to attend an event that radically alters your perspective and shatters your once, long-held presuppositions. That happened on October 3, when Her Excellency Princess Asie Ocansey of the royal family of Ada, Ghana arrived in Denver and extended a royal welcome to African Americans to return home to Africa.

She arrived in a spectacular, dazzling processional at New Hope Baptist Church appearing to almost levitate over rose pedals thrown before her to the powerful beat of African drums and dancers. The event was so extraordinary that I felt my soul smiling and saying — Yes!

Ocancey’s visit comes on the heels of the 400th anniversary of the arrival of our African ancestors in North America. The Royal Return is part of a comprehensive effort to engage African Americans in reacquainting us with our native land.

Central to her visit to Denver, as well as several other American cities is to promote what is being hailed as the Wedding 400 Extravaganza.  The event will feature 400 couples who will renew their vows in a lavish royal ceremony designed to honor our ancestors in America who were not allowed to marry for the first 250 years of slavery.

Upon their return home, guests would be adopted into one of Ghana’s royal families; having their names restored, reconnected to family, and bestowed a parcel of land in an event designated as – Return of the Royals in Ghana, December 8 to 15 and December 8 to 18 for the honeymooners.

According to Ocansey, although the occasion has called for couples, anyone can attend.

“We extend an invitation to all of our brothers and sisters to return home for any of these reasons,” she says. “So yes, come home for your renaming or adoption into the family or to renew your vows in a traditional royal ceremony. We welcome you to participate in one or all of these celebrations.”

Her passion for this reconnection across the Atlantic stems from a promise she made to an American visitor to Ghana some 50 years ago. She recalls being introduced to a visitor who seemed a bit unusual; he was Black but he was from America.

“It was the first time I had ever seen an African American,” she recalled. “All the visitors prior to him had been European and I didn’t even know that there were Black people in America or anything about their experiences – I was 9 years old.”

As it would turn out, the gentleman was the dean of the school of engineering at Rutgers University in New Brunswick, New Jersey. His name was Don Pfieffer. It was Pfieffer who introduced her to the African American experience.

Surprisingly, most Ghanaians were totally unaware of the slave trade.

Mr. Pfieffer explained how our ancestors were taken away brutally and forcefully. He would challenge her to one day work to build connections between the two peoples.

That one conversation with the American stranger, all those years ago, would change her life forever.

“I was a science student and normally science students didn’t take history in Ghana,” she remembered. “I took history because of the seed that had been planted by Dr. Pfieffer.”

It was when she was of 15 that her history class visited the slave dungeons. Although she recalled they looked familiar, she had never visited then. It was through her history lessons that the images first emerged.

“This is what Dr. Pfieffer was telling me about,” she recalled to herself. “The dungeons that our people were held had been preserved as heritage sites. The fact that a church sat atop the dungeons seems so ironic and counterintuitive and it had a profound effect on me. During the visit, they locked me in a cell so that I could get a feel for what it was like for our ancestors. Once the door was opened I bolted through the ‘door of no return’ and vowed to never return to this place.”

She remained horrified by the experience but became determined to do something about it.

“I learned that they would pack our ancestors in the dungeon and feed them through cubby holes, throwing the food in and letting them scramble and fight for it like dogs,” she explained.  “There was no way to clean ones self. Women on their menstrual cycle would be left without care. They only time they would be cleaned was when they were selected to be raped. They were held there for months.”

For Ocansey, the past 400 years are over and it is the beginning of the next 400 years which will be defined by cooperation and prosperity.

According to the Princess, the veil of deceit and deception has been removed and now it is time for African Americans to come back as a family and receive your proper names.

“When your names were taken away, your whole identity was removed,” she said. “In Africa your name is like a GPS locator. If you tell your name, everyone will know immediately who are. If you say Ocansey, they can take you directly to your home. Your name is your address; so you see how devastating it was for them to be deprived of their names.”

Now, she says, “We must be intentional about reversing these harmful and destructive images. This is part of our overall long term plan. Her first visit to Denver was for the Juneteenth celebration in 1999. She has returned today with a far greater vision and plan to continue building connections between Africans and African Americans.

In the US, she expressed, you know everything that they know. You have scientists, engineers, manufacturers, aviation experts, legal experts, construction experts, business and finance, government expertise, college presidents, professors in every field and experts in literally every endeavor. With that there is nothing that cannot be accomplished when we come together. You even became President of the very nation that committed the most heinous crimes against you imaginable, for centuries!”

The goal, in both the short term and long term, is encourage African Americans to bring technical expertise, financing, and all what we’ve learned in America to bear in Africa.

“We need a joint rebranding for the African and African American stories,” Ocansey said. “We now have control of our images and the next chapter 400 years will unfold in a completely different way. Now we have the freedom, the tools, the knowledge, the experience, the global exposure, finances and resources to create a brand new future.”

It may be more of a task than it may appear. While attending Rutgers University at the encouragement of Dr. Pfeiffer, who was then Dean of the Engineering College, she recalls seeing her first Black female student.

“The first African American I ever met was a young woman while I was attending school at Rutgers,” she said. “I was so happy and rushed up to say you look just like my cousin – who was all African.”

The young woman’s response would be devastating. “I ain’t no African. Don’t you call me no African,” the woman screeched.

“I was heartbroken. I ran to Dr. Pfeiffer and reminded him that once he challenged me to help bring our people home. How could I accomplish this when our brothers and sisters appear to want nothing to do with Africa?”

Building a different level of consciousness here in the U.S. will be one of first tasks, according to Ocansey. Her plans include developing closer ties with Historically Black Colleges and Universities (HBCU’s).

“I would like to encourage Black students attending HBCU’s to conduct their study abroad experiences in Africa. It would completely change the way they see themselves. With that level of exposure, no one will ever be able to tell them any foolish untruths about themselves or Africa again,” she said. “Our coming together is crucial to the overall success of the entire Diaspora.”

singer and song writer, Isaac Hayes, went to Ghana. He was made a King for Development. Hayes was able to bring multiple development projects to bear and built schools. This is what inspired Ocansey to begin to reach out to African Americans on a much more massive, national scale.

While the Princess has no constitutional authority, her ceremonial role is to promote the culture of Ghana throughout the African Diaspora.

One of the biggest challenges, according to Ocansey, is to bring a halt to the flight of capital and our financial resources.

With the well publicized “Black Wealth 2020”movement in America rapidly approaching, the timing of Ghana’s efforts could not be better. Part of the goal of “Black Wealth 2020” is to begin to leverage our financial resources for the very purposes espoused by Princess Asie.

African American leaders across all sectors have begun a collaborative effort to bolster Black owned banks, among other agenda goals, that are designed to build financial capacity for loans and investments through the African American community.

Ultimately, the goal is to involve all of Africa.

There are 16 regions. As part of the Royal Return this year, couples will go to the different regions ruled by the eight royal families for their ceremonial events. The festivities are intended to confirm that you are coming home and that you not be a tourist.

Ocansey admits that the hope is to reach the masses of the Black American community through technology. They have prepared virtual presentations and are working to develop virtual trade expos that can be viewed anywhere in the world. This would prove helpful in attracting widespread investment in all areas.

“Technology has given us a whole new edge that we never had before,” she says. 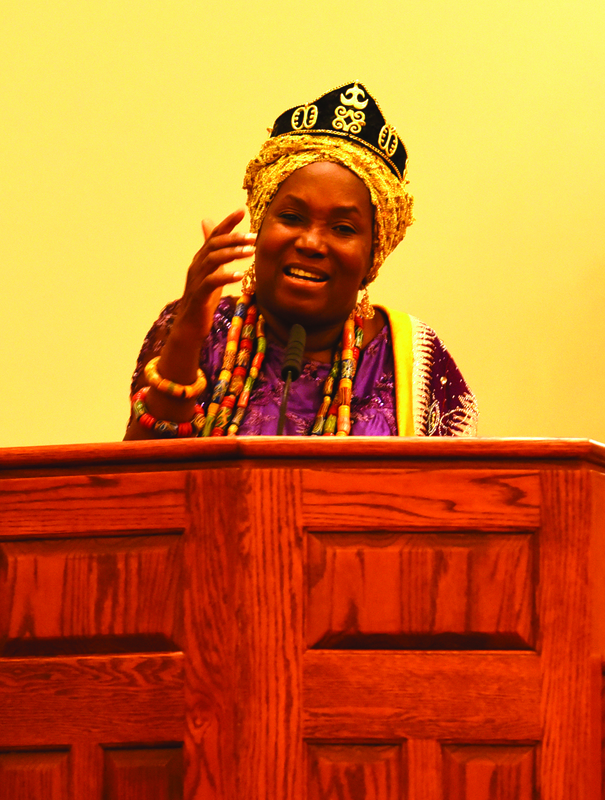 As part of the royal family, Americans are encouraged to bring their expertise to bear. The family would provide land for you, according to Ocansey.

“For Instance, if you are adopted into the Ashanti family and they have gold in their region, perhaps you might build partnerships with an American or global jewelry companies to refine the gold and create wealth and invest in the nation,” she proposed.

From Denver, the princess traveled to other cities including Baltimore and New York before heading to speak at the African Union Labour Migration Conference in Abuja, Nigeria.

“We want to expand the model of naming an ambassador in many cities around America so that we will have advocates in many areas that can help spread the word,” she says. “We want to leverage all African American media outlets to discuss our royal return plans more broadly.”

Ocansey says, “The past 400 years were spent tearing us down. The next 400 years will see our rise. Come home where you will be appreciated, you’ll be loved and welcomed back into your family. In the end, you’ll discover that there is no place like home.”

Editor’s note: For more detailed information on the Return of the Royals or to sign up, visit www.royalreturnghana.com or call Colorado Ambassador Bee Harris at 303-292-6446. To view a special message from Princess Asie Ocansey, check out this video, https://youtu.be/jr-qkrXCgOs